Boo Radley lives on my street. 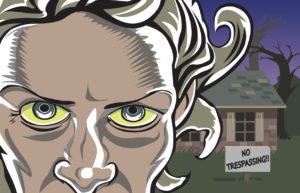 Moving into a new neighborhood, one never can be exactly sure who your neighbors are going to be.

You can do advance scout work.

You can go to the street on which you hope to live and park your car at night.

Roll down the windows, listen for barking dogs or screaming children or loud disturbances that might seem out of the ordinary.

But in the end? you roll the proverbial dice, and take your chance.

It’s a bigger gamble for those who own in this regard. if you rent and get stuck next to an intolerable situation. you can break the lease, or wait a year and move when the lease runs its course. either way you can get out of dodge sooner than later. at a lot less of a cost.

When you buy? it’s a little more of a bite in the rear. you end up in most cases losing money on the deal. depending on the market of course. maybe you luck out, and the housing in your neighborhood goes up. maybe not? you’ll most likely be asked why you are selling? everyone asks that question. and no one wants to say it’s because of the kook down the street.

Sometimes even with the best game plan possible, you might miss something. Boo Radley’s can be quiet. only showing themselves on those rare instances.

Maybe? at first you won’t see them.

Perhaps? you will hear stories. your neighbors who have lived on the street on which you have moved will start to speak of them. there won’t be any eerie music accompaniment when you get your first sighting. the Boo Radley on my street is a woman. everyone seems to have a Boo Radley story that they like to tell. neighbors on all sides of her house. people who live one street over have a story.

I had been warned, to watch out. never under any circumstance turn my back on Boo. even for a second.

I should give you a visual description. this may be why some of the neighborhood is a little uncomfortable around her. I’m guessing about 45 years old? whisper thin, pale complexion, her eyes are the thing that concern me. She never seems to blink. in any staring contest? Boo would destroy the competition. when she walks? she never moves her arms. that thousand yard stare has freaked out more than a couple of the kids in the neighborhood. no kid will walk on the sidewalk in front of her house anymore. you’ll see them ride their bikes or approach her house on foot. Right before they reach her property? they veer into the street. no one ever walks on the sidewalk in front of her house. except for me. seems a wee bit unusual doesn’t it?

What are they afraid of?

The house she lives in is a brick ranch. no grass in the front yard. just some dirt and several large old trees. a late-model car is parked in her driveway. home security sign prominently displayed out front. and a “no trespassing” sign on her door. I see a light on in the front window from time to time after dark. but for the most part at night? it looks like no one is home. the mailbox next to her front door is crammed full. I’ve watched our postman deliver her mail, hustling up to the door doing the quick step, he doesn’t linger on her property. I’m guessing it’s not his favorite stop?

I know of no laws for people being odd or creepy.

Does she have some quirk’s? some think so.

She’s a little of the anti-social variety. I listened to my neighbors warnings upon moving in. “Watch out she’s a handful.” “She hates kids.” “Be careful about offering to help her shovel her driveway during heavy snow falls.” “Stay off her property.” “Don’t park your car in front of her house.” “Do not try to chat her up.”

OK? So I should just let her do her own thing? Doesn’t sound too bad to me? Some people just want to be left alone.

You never know what traumas they may have had or continue to have in their life? Maybe they are dealing with an illness or suffer from social anxiety and need medication to level things off.

I can handle that. I’ve been told by friends at times, I’m no summer breeze myself.

Her name isn’t really Boo, I call her that in the small chance…that billion to one shot, she stumbles onto this story. I don’t want to wake up in the middle of the night and see her standing there looking in our windows with blood dripping from her teeth. clutching a squirrel with no head in her left hand and a holding a list of names with my name crossed out in her right!

My wife passed her house the day before the Fourth of July last year. one month after we moved in. Boo was outside watering her dirt. my bride smiled, waved and said, “Happy Fourth of July.” she turned towards my wife and muttered “F*#& the Fourth of July.” I wasn’t there. I didn’t see it or hear it. I do believe my wife’s account. she’s just not the type to make up stories like this. Perhaps Boo had a bad experience with fireworks on the fourth? maybe this is part of that social phobia thing she may have?

When my wife see’s her now? she’s polite, she will say hello, but that’s it.

Boo Hysteria was running rampant around our neighborhood. and I kept missing it.

The village in which I live, celebrated a founders day recently. This was to honor the very first residents who settled here many moons ago and were the first to call it their home. many of these founders have street’s in town named after them. there was the usual small town celebration. pancake breakfast in the park. historical lectures and tour. an old fire truck was brought in to give rides to the local kids. the route of the fire truck went right down our street. the kids on board were between the ages of 5 -10. and kids being kids? when happy?  like to yell and scream a lot. apparently this did not please Boo Radley. by the 3rd or 4th trip? as the fire truck rounded the corner once more?

Boo appeared in her doorway. she came out of her house, walked down to the curb. most of the other neighbors were out in front of their homes waving at the screaming kids enjoying their ride. And the kids waved back. Boo did not wave. She extended both her arms and middle fingers. she didn’t shout at them, not a word passed from her lips. I don’t think the kids on board knew what hit them? the residents out watching her sure did. but then? no one had the gumption to say anything to her. once the fire truck passed. she slowly turned around and went back into her house. closing the door. as calm as someone is when they go out to pick up their morning newspaper.

No one believed me when I shared the story at work. I’ve had more than one of my neighbors tell me that they witnessed it firsthand.

I’ve always liked to think everyone deserves the benefit of the doubt. People are just too quick to judge others. just because someone behaves in a manner that is? Well? is a little odd to some. everyone is capable of a bad day. right?

Haven’t you ever done something you wish you hadn’t? that you later regretted? we all have a few skeletons in our closets. don’t we? C’mon now? tell the truth.

The more I heard the tales. The more I thought, Wow? it’s like the villagers in “Frankenstein” with their torches! wanting to storm the castle. wanting to destroy what they were afraid of, odds are, at least one or two in that crowd had to be thinking, “I don’t know? Hans? are we sure we want to burn down this guys house? I don’t even know him?”

I remember the day that my mind changed. The day Boo turned on me.

I was walking home from work. as I passed her house, Boo had come outside to take her garbage to the curb for pickup.

I’d had a difficult day at the office and wasn’t thinking clearly. my mind wandering on the days events as I passed her.

I said it by accident. I swear! it was, an accident.

I stopped, turned to face her, scrambling to recover. in my panic I couldn’t remember her real name? shit shit shit, What the hell is her name?

I broke into a Jackie Gleason “Hamana Hamana Hamana.” she snapped. charging at me, growling. was on me before I had time to react. I fell backwards. she pounced, Screaming. “I KNOOOOOO OOOOOH YOOOOO ARRR!”

You’re never supposed to hit a lady, right? of course not! Never under any circumstances. it wasn’t like she was trying to stab me in the leg with a pair of broken rusty scissors. So I just pushed her off. ran to our house. made it to the door. key in hand.

I don’t know if she chased after me? I got inside, slamming the door behind. looking out the peephole. nothing.

Then, I went around the house making sure all the doors and windows were locked up tight.

That night? I slept with one eye open.

I haven’t told anyone what happened that fall evening. Until now.

These Days? I try not to make eye contact with her. I walk in the street like the kids on the block. hoping she’s willing to let bygones be bygones.

Perhaps? I should have been a little more careful. I didn’t mean to call her Boo?

It just slipped out.

Everyone has a Boo Radley on their block.

Maybe you’re the Boo Radley on your block and you just don’t know it?

You never know who your neighbors are going to be.

We all roll the dice.