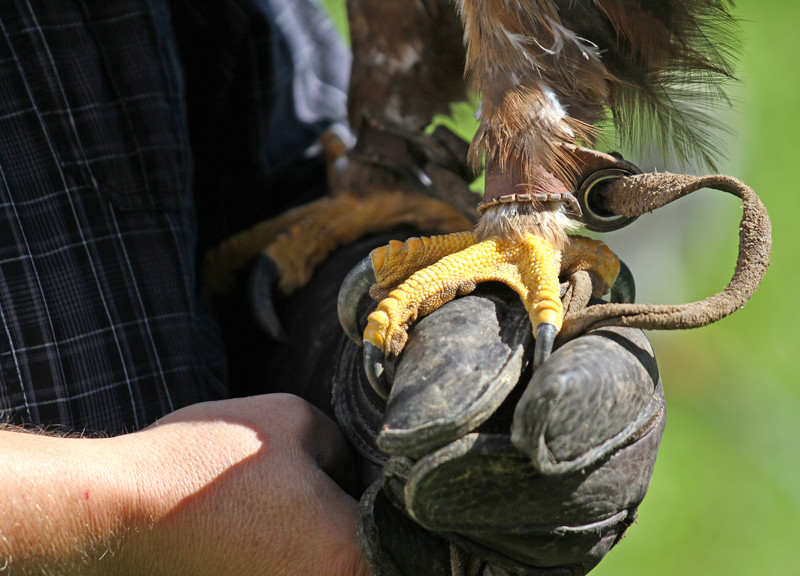 I thought he was in costume when I met him. he was wearing a suede jacket with fringe and feathers. on his left hand a huge mitt that looked like a welders glove?

“Can’t wait for you to meet him. games at noon. you’re in for a treat. See you Sunday.”

I hung up the phone.

Watching the Game at my friend Jocko’s house. his sister is in town, with her new boyfriend from Arizona.

Jocko met me at the front door, I had stopped on the way over and bought some chicken wings.

“What are you doing? Wings?”

“Just put em in the kitchen.”

“You aren’t gonna believe this character. I don’t think he’s a fan of professional football. He’s into birds. be nice, it’s my sister.”

Jocko introduced me to Russell. we shook hands and I sat down.

Halfway through the first quarter.

“HEY That Guy Just Threw Something On The Field!”

Exchanging glances with my friend. I realize that the falconer isn’t kidding.

“That’s a penalty flag, the referee’s throw that when they see something illegal.”

“Against the rules, Where are the ladies Jocko?”

“He resting now. Perhaps, after the contest?”

Standing, Russell pulls out his phone. “Pardon me.” exiting the room.

I look at Jocko.

“Why is he wearing that mitt?”

“Where is it, napping in the guest bedroom?”

Russell walks back in, sitting down to silently watch the rest of the first half.

Our attempts to draw him out into conversation prove to be futile.

A couple of field goals make it 3-3 going into halftime.

Russell excuses himself once again to make a phone call.

“OK. you gotta be quiet, no messing around.”

Entering the kitchen, I ask, “What brings them to town?”

“You know? a contest, for umm?…his bird to hang out and compete against other falcons.”

“Jocko? Falcons are not pets. they don’t hang out. this is serious business. these birds are trained to kill. Did you notice how he walks? he holds his arm out like a butler handing you a towel.”

“Who? the Bird or Russell.”

Jocko opens the door to the Garage.

In the corner is a coat rack with a bird perched atop it.

“What the…is the bird making it smell like this? or is it like this all the time?”

“Open the goddamn door and get some air in here. It smells like ass.”

“Where’s your flashlight? I’ve seen pictures of falcons before, they didn’t look like this. This bird is a fake.”

“Shuddup, You don’t know nothing.”

“Who ties up a bird and places a hood on his head? then holds him in a dark garage. don’t they have hotels for special birds like this? hotels or barns, bird hostels? seriously man. it’s going take a lot of cleaning in here to get this stank out.”

“Have you seen him fly yet? get that goof in here or I’m gonna take off his little leather bird hat.”

“Jocko? He’s wearing a blindfold. what have you gotten yourself mixed up in! is this some sort of bird S&M thing? C’mon, take off his mask, let me look into this crazy birds eyes.”

Enough is enough. I lift the hood off Francis head.

Seeing Jocko and I standing there next to it, the bird goes berserk. its wings flapping wildly.

Lunging forward towards my face. Screeching.

Jocko and I fall back onto the garage floor, scrambling for cover behind his car.

After banging off the garage door a few times Francis has settled on the rafter above us.

“Give him a friggin cracker. Maybe it’ll calm him down?”

“Cracker? They eat mice and small critters. it’s not a parrot. we’re in the garage. You See Any Crackers Out Here?”

Upon Hearing the commotion, Russell rushes in, from above, his bird bellows.

“Behave Yourself! None of that Now. None of THAT!” Russell shouts.

Crouching down. and now frightened. I look at Jocko.

“Is he talking to me or the bird?”

No response from Jocko, who remains motionless, as if he doesn’t move, no one will notice he’s there.

I decide it’s time to go. Mood is Wrong.

Covering my head in my hands I make a break for the side door of the garage.

Too late. Francis spots me and is in hot pursuit.

Yanking the door off its hinges I stumble outside.

I feel the whoosh of air above. Francis buzzes right over my head before disappearing into the late afternoon grey sky.

In Retrospect, I’m not sure how I feel about it?

At the time my survival instincts kicked in.

Most of you would of done the same thing.

After some quiet reflection.

Was this bird a prisoner? Held against its will.

Did he and his former master have some kind of bond that was beyond my understanding?

Did I do the right thing by accident?

It would appear no.,

The Falconer put an ad on Craigslist about a missing Falcon, offering a reward for it’s safe return.

We have heard nay about it.

It’s been 7 weeks now since he flew the coop.

He’s expecting some serious cash from us for a new bird.

The last time Jocko and I spoke to discuss the delicate matter of Russell’s money? Didn’t go so well.

“Hey? did you ever see that Maltese Falcon with Bogart? how much do you think that falcon cost?”

“Jocko? That was a stone bird. not a real flying around type of bird. I seriously doubt the falconer is going to accept a painted statue of a bird? Which, by the way Brainiac? won’t fly, or be able to go to bird meets to hang out.”

We were shocked to find out a new falcon is going to set us back about five grand.

We finally did agree to split the cost, Jocko tried to stick me with the full cost at first.

Until I explained to him that he never should of shown it to me without The Falconers permission.

It was his house after all the bird was staying at.

Before we cough up the dough, we’re trying one last thing.

We’ve put together a flier to post around town.

Answers to, Hey Bird! and Francis.

Give me a shout if you see a large unidentified bird flying around.