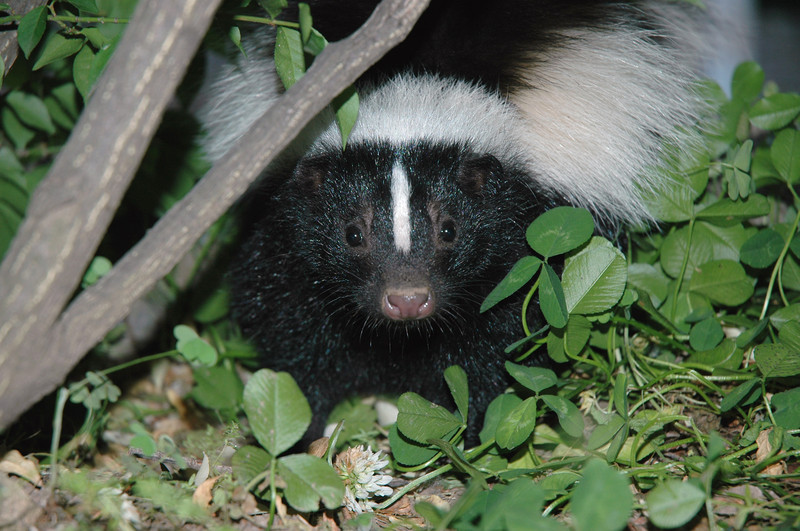 The town I live in has been over run by skunks.

They’re everywhere. if you own a dog? The chances are its been sprayed by one.

I was told that if you encounter one and it’s getting ready to blast you? You’ll know it because the tail raises right before it releases its stank. if you can move fast enough and pin its tail down? you just might avoid getting blasted.

I tested this theory out recently while taking care of my mother in laws dog.

I’m gonna refrain from using his name here, I’m not sure he’d like me involving him.

Upon coming across a skunk on a walk with “the dog.” I startled it.

Now a skunk moves slowly. The don’t run away. More like waddle away.

I should mention I was as scared of it, as it was of me,

I wasn’t looking for any trouble.

We were minding our own beeswax.

Try explaining that to a frightened animal with a brain the size of a pea.

I panicked dropping the dog’s leash as the rotten little stinker raised its tail.

It nailed me mid charge squarely in the chest.

Stunned me. can’t describe it. it was awful.

The skunk took off between a couple of houses.

I looked over at my mother in laws dog.

I swear it had this look, like, “What the hell were you thinking?”

I was, after all? only trying to protect him.

I ran home dog in tow, thinking….how am I going to explain this?

Why didn’t I just leave it alone?

My wife bathed me in a mixture of hydrogen peroxide, baking soda and liquid dish soap. which? trust me on this, sounds a lot better than it is. The concoction is supposed to lessen the smell. it did help a little. I guess? Though not enough to be let back into the house.

I had to throw out what I was wearing, and sleep in the garage.

My mother in laws dog got an apology in the morning. me? I got nuthin.

He had to sleep in the garage with me. We didn’t say much to one another.

I’m not going to have to dog sit anymore, I’m pretty sure.

I was told by my wife and mother-in-law I can’t be trusted.

And if we do get to watch the dog?

My wife can walk him. I’ve been asked to stand down. I’m out. done.

Too bad really, Cause I love the little guy. We were friends once. maybe we can patch up our differences someday and move forward. people do it all the time.

Skunks? really? getting to be no ones safe outside after dark. take heed.

They’re out there you know? waiting. watching.

I’m just lucky none of my neighbors saw the exchange. This kind of stuff is not what I want to be known for around town. I’ve already made a few bad judgement calls since we moved in according to my wife. I’m trying to fit in here, honest I am. but we’re talking about a wild animal. and they can be unpredictable. you never know what they’re thinking.

If I could have somehow communicated with it? I would have told it, ramble on little friend, the dog and I mean you no harm. he’s just got to take a leak, and I’m only out walking him because my mother-in-law is out of town.

Alas that would not matter. no words or hopes or prayers would save me on this evening stroll. I was dealing with a force of nature. one that could not and would not be reasoned with.

If only? I had not panicked.

If only? I had not listened to my co-workers advice.

Maybe, I would have avoided the ordeal?

I really am not the monster I appear to be. I love animals. its true animals sense something inside of us. they have a sixth sense. this animal like other animals I have come into contact with in my life decided that enough was enough. he must pay. there is a bill that must be paid. a debt that must be settled.

I’m not going out after dark anymore. let them tangle with someone else for a change.

I’m through with the animal kingdom for a while. at least for the time being.

I cannot look back on a life of achievement anymore, or of challenges met, or competitors bested.

This obstacle was not overcome. I was.