Up at the Lake 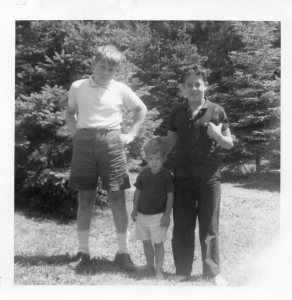 Roach had me by the collar. He flung me like a sack of potatoes.

I landed in the lake. My older brother dove in and fished me out. We called the kid across the lake Roach. I’m Not sure why? Maybe that was his name or just some nickname he got tagged with? Roach meant to toss me in the direction of the Bear that charged us. unfortunately for him. I slipped out of his hand as he windmilled me, and I flew into the lake, not into the path of the bear. sometimes you eat the bear, and sometimes? the bear? he eats you. I was 4 going on 5. I don’t remember much? I remember the lake and the cabin. But not that day. though others would.

Our family spent the month of August that year in Northern Wisconsin in a rented cabin on a chain of lakes vacationing. My older brother Tom and I would find all kinds of stuff to do that summer. Dodging Bats in the attic, Fishing for Tadpoles and Listening to the Loons.

I looked up to my big brother. he was cool. I wanted to tag along everywhere he went. I’m sure that day he would’ve rather hung around with Roach across the lake? instead of his pesky little brother. Can’t say I blame him. There was a ten-year age difference between us. after a while you have to get exhausted listening to a 4 year olds relentless questions? on the rare occasion they would tolerate my company.

We were walking from our cabin to the Roach’s cabin on the other side of the lake by taking a path that skirted along the lakes edge.

I didn’t understand the concept of wild animals back then. Not that I would have thought that the beast charging at us was Yogi Bear.

The Bear we found out later was only trying to protect her cubs. we startled it. and it did what bears do. protect their young.

Roach never liked me much. I was just a nuisance to him. a little brat. my brother was put in charge of watching me that day. my parents were going out shopping. he had no choice, he was told, “Watch your little brother.”

When you’re young. you don’t get up in the morning and make plans to do anything. you just hit the ground running and see where the day takes you. hopefully you have some fun, laugh and find some trouble to get into that won’t necessitate a trip to the hospital.

That day I got lucky, I just swallowed some lake water. Roach? he didn’t fare so well, he lost a lot of blood. ending up with a huge bite out of his right arm and left leg. the bear bounced him around like a rubber ball. I’m not sure how many stitches he took? my brother tried to explain it to me. after trying to count the number on my fingers? I lost track, anything after ten to a 4 year-old? might as well be in the hundreds.

I realize how fortunate I am that I slipped out of Roach’s hand.

At first, he was considered a hero. Then he spilled the beans. he meant to toss me at the bear, hoping it would go after me instead of him. I was nothing more to him than cannon fodder. Sorry kid? wrong place, wrong time.

Our family would visit Roach in the hospital, bring him gifts, offered to help his parents with their medical bills, we believed he all but saved my life. they politely refused. after he was released. he was confined to their cabin for the remainder of the summer. We’d go over every day. bring him cookies. hang out, drink coca cola sitting in the shade of his screened in porch looking out at the lake. it was fun, good times, easy living.

Until a couple of days before our vacation ended. while goofing around. my brother made growling noises at Roach. and he snapped, he started to yell and scream, his arms were flailing about. I don’t think my brother intended to scare him? although? this was the same guy who told me the Boogie Man lived in our bedroom closet.

Once Roach calmed down. he came clean with the real story. We never saw him again. My Dad was fit to be tied when he heard the truth, Mom calmed him down, he figured it wouldn’t do any good to make a stink. His kids were OK. There were no bite marks or scars for them on this day. Those would come later for his boys. And not at the hands or claws of a bear.